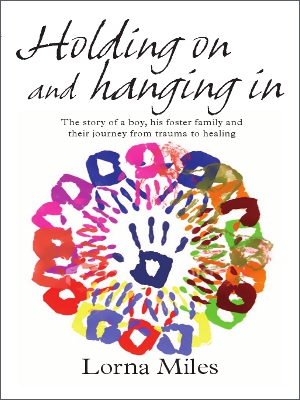 Holding on and hanging in

This compelling story tracks Wayne’s journey from first being fostered by Lorna at the age of nine, in a therapeutic fostering placement, through nearly four years of family life. Wayne is traumatised by his early experiences of neglect and domestic abuse. Even when surrounded by a team of experienced foster carers, counsellors and therapists, helping him grow and heal will be a long and difficult process. But Lorna and her family are determined not to give up hope…

This honest and heartfelt account, published as part of the Our Story series, takes us through the highs and lows of Lorna and her family’s dedicated perseverance to help Wayne move from despair and anger to health and recovery. Lorna describes her feelings and responses to the events that take place and is often able to portray the humour of situations, alongside the difficulties and frustrations, which present themselves.

Readers will gain an understanding of the different parenting styles and techniques that can be used in re-parenting children with attachment difficulties, often illustrated with actual dialogue.

Wayne’s behaviour is, wherever possible, accompanied by explanations of what might have led to his actions. There is an emphasis on the importance of trying to understand what lies behind a child’s behaviour rather than just labelling them as naughty, bad or uncontrollable.

‘Most of the good feelings, including love, had left Wayne’s “island” long ago, leaving him angry, fearful and with an overwhelming need to be in control, making it impossible for him to establish a positive, reciprocal relationship. He relished power struggles, thrived on causing emotional or, sometimes, physical pain to others, had a limited ability to control and regulate his emotions, and couldn’t ask for help.’

‘Wayne also thought that every conversation was about him, and would not believe otherwise. One evening he was upstairs, supposedly asleep, when suddenly he stormed out to the landing throwing anything within reach and hurling a string of foul abuse, ending with, “…and if you hate my, why don’t you just tell me, I’ll pack my bags and go.”…Trying to persuade him otherwise would have been impossible, so we acknowledged how sad it was that he had thought we were talking about him, confirmed that we wanted him to stay with us, and suggested that if he insisted on leaving, perhaps it would be better to wait until the morning when it was light. Wayne went back to bed…’

‘What took place in the therapy room would often leave Wayne angry with his birth mother for the lack of care she had given him or with me for daring to suggest that her care had been inadequate. Either way, getting him home was often a challenge: Wayne saw me as the villain of the piece and the last thing he wanted to do was walk sensibly by my side to the car.’

Lorna Miles and her husband Tim have two adult adopted sons, David and Malcolm. Lorna and David have been involved with children in the care system in various ways since 1977. In addition to fostering at various times, Lorna has worked with children, young people, and often their parents or carers in a number of settings.

I am in the process of being approved for fostering and read this as part of exploring what I might be letting myself in for! It is certainly a very honest and open account which clearly outlined the challenges both from the child and from the system. It detailed some of the challenges and how they were dealt with – but ultimately an extremely uplifting book which has provided me with tools to use when I begin a new career, Recommended reading.