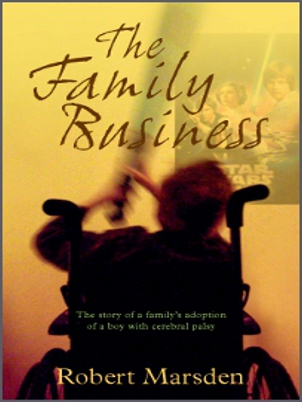 Published as part of the Our Story series, The family business is the true story of the adoption of William, a little boy with cerebral palsy, by a middle-aged couple with three birth children. It tells of the journey William and the other members of the family made to get to the point where they felt they were a whole family.

The story describes the doubts of the parents in the early days, the confused feelings of William, and some of the frustrations and humorous adventures the family has had in the “disability world”. It is a positive, upbeat account of the growth of love and the cementing of family bonds.

Anyone who is interested in the adoption experience and how this feels for the people involved.

‘William wasn’t a baby, and he wasn’t ours, at least not at first. We learned the new skills needed to care for him fairly quickly, but the emotional bonding came much later. Without doubt, for the first two years or so the emotional challenges he presented to us as parents were far greater than the demands of his physical disability. In fact these were a doddle by comparison. The balance shifted as he grew older, and now that he’s our son – fully ours – and sees us as his parents, the physical and wider social demands are the most worrying and challenging.’

‘William said, ‘I think I am really lucky’.

He scooped up the remains of his dinner, put it into his mouth by himself, and began chewing; taking his time, keeping us in suspense.

The answer, when it came at last, didn’t feature any of these things. ‘I’m lucky because I’m so cool’, he said’

Robert Marsden trained as a social worker, and has spent most of his life working with children. He has had a number of short works of fiction published.

This book is an account of the personal journey undertaken by the author and his family after they adopted a son with quadriplegic cerebral palsy. The style of the writing makes light, easy reading, delivered in a narrative, story-telling format. It is a straightforward book, which would be most useful to prospective adopters. Social workers may also find the book relevant. The story offers a very personal viewpoint, illustrated with humour and amusing anecdotes. The focus is on the child, rather than on his disability and is a heart-warming and positive uplifting story that leaves the reader wanting to read the next chapters in this family’s journey.

This account of the adoption of William, a little boy with cerebral palsy, is written by his adoptive father and is part of the Our Story series, which explores adoption experiences as told by adoptive parents. The author has a lively and engaging style. Both the day-to-day tasks of caring for William and the adopters’ reflections on William’s birth family are described in what seems an honest and realistic way. The last chapter gives useful guidance about the adoption of a child with disabilities.